My letter O stands for “Odekerkpark”, a parc in the centre of Etten and named after Mayor Odekerk (1960 -1976) who played an important role in the development of the village. It has 2 statues: “De Evolutie” (The evolution) which symbolizes the quick growth after worldwar two and  “De uitvliegende vogel” (The bird leaving the nest) and it is a phenix leaving its stylised nest of branches. In my templates I didn’t have one I liked for this letter but I had an illustration of a template with a rather thick passe-partout that I liked. So tried my hand at making my own. The rest is in keeping with my alphabet. 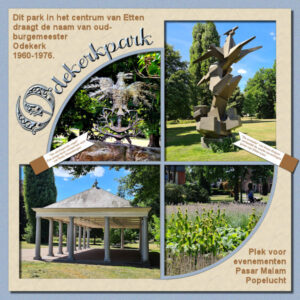