Well, it’s 1am here in Memphis and I have finally finished Lab 9 Mod 6. For this one, I really enjoyed making the fan and made several of them – this one had an oriental feel (I had made a pattern of a photo I had taken of my friend’s oriental rug), so I finally decided to go with an oriental setting. Instead of dragons, I used some swirls I had made months ago from an idea on a sketch. For the lab: multifont sticker – I did not want to use a “fun” font for the sticker so I only used one font – changed it
up with the warp mesh, but did make a sticker out of it; also called for “scribble text”. Well, it definitely came out “scribble”! However, mysterious was a good word for it and so it is the mysterious east (I think the word mysterious will work for a Halloween layout sometime). The emerald linking the 2 photos was made with a script from Cassel. 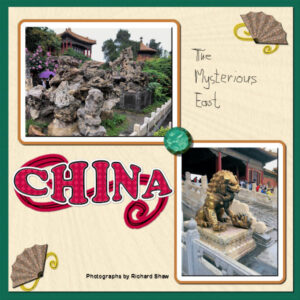