Here’s my entry in the July Friendship Challenge. Most of my friends are Facebook friends that I met through a book club group there. We have since gotten together in real life also. My layout is based on a sketch I had in my files and I transformed it to a template. I have fun doing that! I hunted for the real font for Facebook and discovered I had it. It is Century Gothic Bold. My title was supposed to be done with Block Type but it didn’t work for me so I used multiple layers of the raster layer of it.

Edit: I see the journaling is too small so here’s the text:

We all met as members of the Facebook group called ASOIAF that was dedicated as a book club for George R.R. Martin’s “A Song of Ice and Fire” series, which eventually was turned into the HBO series, “Game of Thrones.” When I joined there were more than 80,000 members all over the globe.  I appreciated that with such a large group the rules were enforced, and no one was allowed to make trouble. Our smaller group, made up of mostly group administrators, traveled and got to meet in person at fantasy conventions every year or so. They were lots of fun and fond friendships were developed though there are vast differences in our ages. 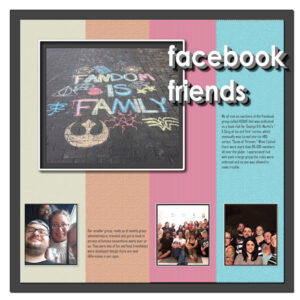