Well, this was supposed to be for the June Scraplift but it wasn’t to be.  Life can get unexpectedly busy sometimes.  I learned a lot with this layout.  Out of Bounds technique on the centre dragon and Coloring the red balls with the eraser tool.  This was a long large freestanding cement installation in a new park in Edmonton where the city is putting in a Japanese Garden.  The sculpture starts with the big dragon in the middle and has two scenes on either side with two dragons playing/fighting (?) with a ball.  Since it was already mostly grey, I used HSL to turn the image red, then made a duplicate and desaturated that before using the eraser tool to reveal the red ball.  Out of Bounds was just a small area on the middle photo (top of the head).  I had a little problem with that as I  thought I followed the instructions to put the white frame on the inside.  when I did that the white frame went straight across the out of bounds part.  So I put it on the outside and it seemed to work. Not sure what I did wrong, but got there in the end.  I chose not to do the Slipped in Photo, and subbed in Cutout Word on a curve.  the pen tool was a bit tricky, thankfully the tutorial was really good and I actually made it work.  More pen tool practice is needed.

I have being enjoying all the various posts in the forums, despite not being too active in them. 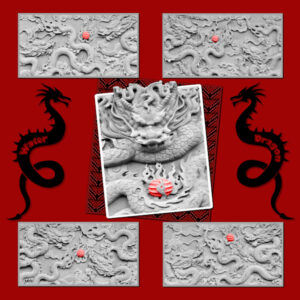