Lab 8 Mod 12 finished and ready for Lab 9. This one called for: 1. spiral notebook page edge and making the edge of the page as a brush (I did this and applied it to the spiral notebook cover and also applied a spiral binding to the cover – from Cassel’s tutorial on how to make a spiral binding picture tube); 2. create a polaroid frame (I did and placed it in the PSP picture frame folder so it could be used with any size photo; 3. phrase strips (I followed the instructions but made the strips as titles for the pictures). The font in the title is AR Herman colorized with hues from the instant effect paintings. The font used in the title strips is Cataneo BT. I had to fix the perspective (with the tool) on my original picture and that is the first time I’ve used that tool. So cool things learned with this layout. Oh, yeah, since the color replacer tool was discussed a little while ago, I’ve been playing with it and using it frequently – so another color changing tool in my tool belt. Oh, yeah, also have been removing overhead wires from pictures and removed a number of them from the original picture – with the scratch remover tool.

Sue and Lynda, I agree with Corrie – your photos are beautiful. Congratulations on your photos being chosen in the Corel contest. 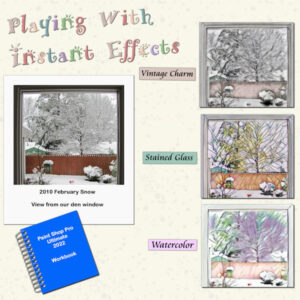