After winning the recent Cassel Vine Tubes I was inspired to play with them using the Vector tube script. For the layout I selected one of the extra templates from the Template workshop in April. The image is from The Spruce about beautiful garden pathways. I added a garden gate image from my files. The papers are from Digital Scrapbooking (Jessica Dunn). Thank you Carole for the helpful tips on how to use the vector tubes script with the vine tubes. I used the pen tool to create a path on the gate and ran the script twice, once with green leaves and then pink. I also ran the script on the letter V in the title for which I chose a plain font to work better with the vine. Added a few more vines and used Cassel’s Custom Confetti script on the red leaves so I could scatter them around. I had a lot of fun with this project. 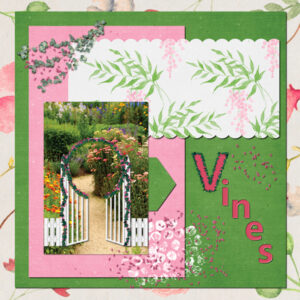