Here is my Template Day-4:I had a lot of trouble with the the text tool and  finally finished it. It seems that all of a sudden my PSP started acting up and whenever I started to write the text as a vector it turned it into a group and placed a text layer underneath the vector layer. Even when I just added a vector layer it formed a group. I worked around it and hope someone will have a suggestion for that. I used the background paper from the tutorial (Rachel Martin) and used Hue and Saturation to blend well with my pictures. I took those many years ago when I visited my cousins in Germany and we went for a drive to the beautiful Lake Constance in the city of Lindau. Lake Constance (known as Bodensee in German) is a 63km-long central European lake that borders Germany, Austria and Switzerland and it is fed by the Rhine River.It is composed of 2 connected parts, the Untersee (lower lake) and the larger Obersee (upper lake). Ringed by resort towns, it’s a summer destination for sailing, windsurfing and swimming. The Bodensee-Radweg cycle path encircles the entire lake in about 260km. 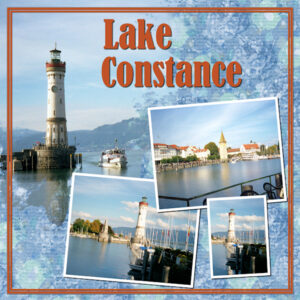