This is Lab 7 Mod 6.  Papers are mine.  Projects this time were: Create a thread? stitch so that it could be a continued line of stitching, a shape to fill with a created pattern (straight stick), a button.  Did all three.  Had fun making the arrow, and the heart.  Was going to do a star too, but decided to flood fill it with a glitter pattern which I will use sometime later.  The fanned pictures are from a script from Carole.  I wanted something different this time to display multiple pictures, as I usually use a boxey kind of layout when there are multiple pictures.  The additional butterflies are picture tube butterflies.  Yes, the little girl was just standing there as there were a lot of butterflies that were attracted to the flowers on her skirt.  Amazing.  The only picture I got was of the one butterfly.  My brother enjoyed the Butterfly House – I had been there before with my daughter and daughter-in-law, Laurie.  The script for the title is Brush455 BT.

Didn’t notice the spot until I submitted the pic.  Went back & changed PSPImage as well as the jpg and _600 jpg. 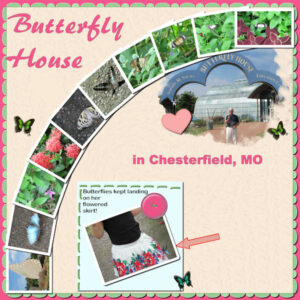 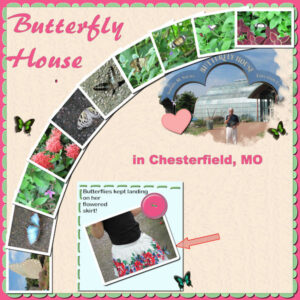