Carole, I had been thinking overnight about your comment about making the text stand out as it would if it was laid across the photo. My problem was that the text was part of the background image that I had obtained from DigitalScrapbook (a design by Marisa Lerin) and not a separate text layer as my Lily & the bear’ text is. Thank you for the suggestion. I made some notes and this is what I did for V2:

– Added drop shadows on separate layers for text. ‘Sweet’ had to be a raster layer as it was effectively an image of text rather than vector layer as my ‘Lily & Bear’ text is. 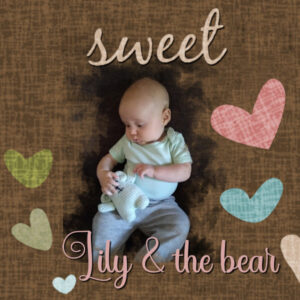