After some checking if I have all the letters of the alphabet covered, I decided to go for my village of which I already have a lot of photos. In the coming months I just have to take a couple more for certain letters, but those are later in the alphabet and of course I can alter the sequence if needed. I’m planning to use the same font (Royal Initialen) for the single letters and probably the same font (Audiga script) for the remaining letters of the title. As a starting point for my layout I used the first of 26 templates that Carole gifted some time ago but I changed it somewhat to suit te photos I wanted to use. The background paper I have in my stash and is by Marissa Lerin.

The story I tell is about a skipper from my village back in 1590 who thought of a trick to conquer back Breda in the 80-Year War between Spain and Holland. I have told that story already when making my calendars. 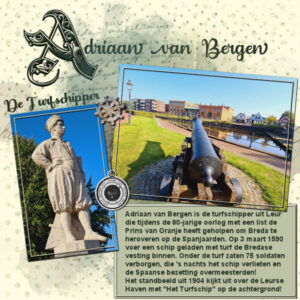