This month has a special story attatched to it  and I already have posted this on Facebook but want to do so here as well. This photo is taken in Leur (now a part of Etten-Leur) and the Dutchies will know it, and so do the recipients of the calendar. Therefor I don’t put it on the calendar but I think for some of youwho love history it can be interesting.

From 1568 – 1648 there was 80 years of war (Tachtigjarige Oorlog) between the Low Countries and Spain and the nearby walled town of Breda was occupied by the Spaniards. The Dutch prince Maurits wanted to take back the town which was heavily garded. A skipper, called Adriaan van Bergen, was bringing in peat (turf) for fuel with his boat on a regular basis and the gards knew him and his boat so well that they stopped searching his boat. So a trick was devised! In the harbour of Leur 70 soldiers were hidden under the load of peat and in the nightly hours of the 4th of March 1590 they very stealthly came out of the boat and opened the gates of Breda for their comrads who had been hiding nearby and the town was taken back!
This skipper is now known as the Turfschipper and the boat het Turfschip. On the photo you see a statue of Adriaan van Bergen on the side of what once was the little harbour. The big building on the other side of the water is Het Turfschip, a community center. The gun is just decoration; the nearby square is called Van Bergenplein. 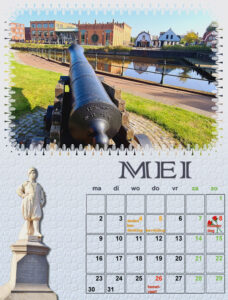