A totally different layout, no halloween or cakes!

This is a card I made for my dear friend who is celebrating her 50th wedding anniversary coming week. Strangely enough I don’t have good pictures of both of them so I only used their initials. The card is one of 4 that I acquired some time ago. Because I made many cards with flowers  for her during her chemo treatment, I didn’t want to do something similar. She is feeling fine at the moment but it will be a celebrating with mixed feelings because it is clear that she won’t have many years left, probably 2 or 3 at the most according to her docters. I used the font Monogram Handdrawn Rose and colored it  with a red rose and green leaves. All text has an inner bevel to simulate those thicker golden elements you see sometimes on cards. The shadow is really tiny because the card itself has no shadows, it is a watercolored card. I tried a bigger shadow, but that was overpowereing. Now I just have to print it. 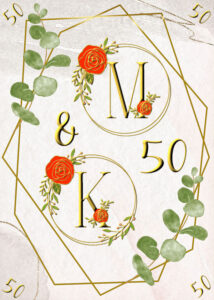