I’ve just been having fun.  Made a separate layout for the dragon cake and will post it in the October theme as well as here.  Also, played with possibilities of Lab 6 Mod 5 which I just couldn’t seem to get into before, but I think I will post my meanderings with Halloween Shenanigans.  Dragon Cake:  papers and elements are mine.  Had fun extracting the cake from the counter with the other stuff on it.  The font is (of course) Cass-icing – the freebie which I recolored to match the cake.  The narrative font is Brush455 BT.

The Halloween Shenanigans:  the spooky elements are all from the 3 Halloween picture tubes in PSP, except the web and spider which are from PS – Brooke Gazarek for the web and Gina Jones for the spider; the font is Decorated035 BT (PSP font).  The background is a picture from Microsoft of a road in Ireland – reduced opacity with a black layer underneath.  I experimented with shadows on this one – different #’s for horizontal & vertical and different shadow colors.  A lot of fun. 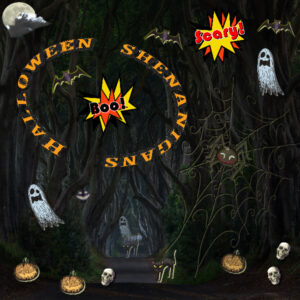