Posted this on the April Zoo page.  I decided not to make it about my granddaughter’s workplace, Claws & Paws Wild Animal Park, in Mt. Ariel, PA where she’s a zookeeper. This is a generic zoo though the info came from her place and two of the photos. I used Carole’s Animal Print freebie alpha but I created the O’s from Q’s so they matched. The golden background paper is using the PSP pattern that came with the program. I guess Carole used it, also, as it matches the alpha. I took a block of color from the bird photo and created the ribbon and flood filled the background to create a border. The pattern I blurred and twirled to get that effect. I used the script to curve the photo top left which came from Claws & Paws. I extracted the top right bird from a Lorrie photo from the internet. The big cat prints are from Carole. The snake and the monkey are from my Safari kit. The Snow Leopard’s name is Gabe and he resides at Claws & Paws. 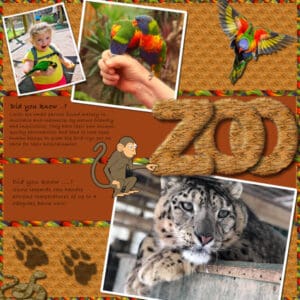