Day 5.  I decided to pick the picture of my sister-in-law who is also named Mary Lou.  Earlier today I had almost finished it and then DELETED IT.  Accidently of course.  So I had to go back and re-create it.  The circle mask went better this time and only has the flower brush used.  I found the font (comes with PSP) called French Script MT.  The other font used is Arial.  Still like to put dates inside elements!  Tried a tube, but it made the page too busy.  Used the paint brush to make the inside frame.  Had fun doing this.  Again, another way to create a mask. 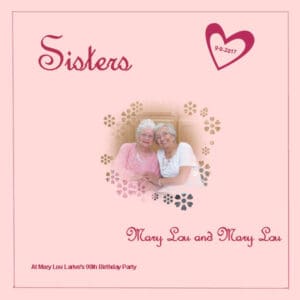