When I was a kid we were NEVER allowed to say we were bored. If we even dared utter the word, my mother used to say I will FIND YOU SOMETHING TO DO. No doubt about it – whatever she found would positively NOT be fun. I find myself ALMOST … almost uttering that word now — and then kicking myself in the patootie. What the heck have I got to be bored about? Yeah, it’s been a slow year … but it has been for EVERYONE! Nice thing about this section of the forum is whatever you want to practice … go for it! I am one of those ones unless I play with it often, I might lose track of how it was cemented in my head back when. Sort of like High School Algebra. LOL Unless you use it daily in a job or something it seems to fly away somewhere into the Netherlands of your brain. Well, it did for me anyway. So no plans for the weekend here … so I have been playing with a whole bunch of stuff that I don’t normally play with. I used PSP Arithmetic to blend some backgrounds together to make a fill for a frame that was different … I haven’t figured out any other thing to do with that. Made the frame and used guides – and then used one of Carole’s scripts to put some circle words around it, used PSP’s own filters for some of the inside – like glass mosaic … well, to be blunt – I was all over the place using stuff. But I will be truthful … I am at a point where I wish we could be rolling stones again. I yearn for a trip to the unknown. So I guess I will just have to paint one for now. The photo used was by Edgar Chaparro – on Unsplash … who was lucky enough to go there at some point! 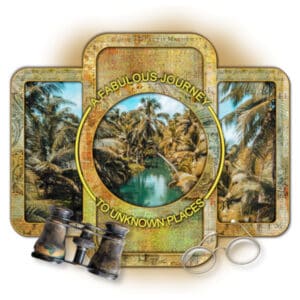