Every year we would take a roadtrip … actually we went by train … more time consuming but very colorful travel and NOT ALWAYS through the best parts of towns – but you sure did see some sights! By the time we got there you were pretty tired of hearing the blast of the horn for all the rr crossings. Interesting note, we had to take the “milk run” as we came from the North – Boston – and the infrastructure in many spots didn’t allow for the high speed train. At one point we actually had to back off the tracks and wait for a commercial train to go by the other way as the lines are commercially owned and they get first priority. We would usually head down to Virginia Beach for a while and then head on out to the Outer Banks. They have marvelous huge rentals out there so big that just about everyone could have their own floor. I was just remembering one today called Dealer’s Choice in a town called Duck, North Carolina. Duck was a marvelous town which became one of our favorites as it had everything one could hope for in the way of a vacation … but in an oddly quaint way. The biggest draw there was the Donut Shop! For miles and miles they would come for those donuts. The house itself had a theater room that was monstrous, but I am not sure who rents a beach place and then wants to watch movies? I guess some do. The beaches there were and I guess still are awesome! Just a bit further down the road is Corolla – where the wild horses are … supposedly with conquistador blood in them or so the story goes. Fun anyway to go on the tours to find them. The horses really do just go around wherever they want to. 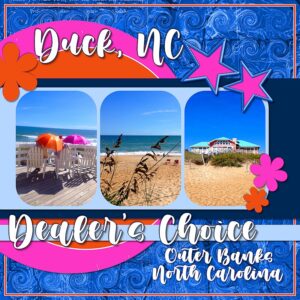