I am finally back working in the Labs.  I had started Buttons & Bows several months ago, but had to stop because of other projects.  Finally finished today with the buttons.  I used my polka dot paper, but the other papers and elements including the buttons are from Fire And Ice by Cassel.  I like to change colors so the papers’ colors were changed to go along with the pink and blue on Emma’s bow and dress.  Even the buttons’ colors were changed.  I used the plain papers for frames for the picture.  The B in “Buttons” and “Bows” is also from the kit.  The balance of the words were from a font but I don’t remember which one I used – I did note that it only had capital letters.  The polka dot paper I did not use at 100% opacity and I used a blank white raster layer under it so that it is pale and doesn’t outshine the picture. 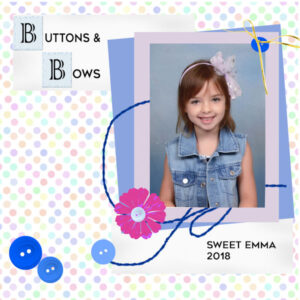