Well, I have given myself a lot to say about this one Scrapbook Campers.  I did create the background paper following Cassel’s Simple Blocking paper tutorial … it is simple and loads of fun, especially as you can create an endless variety of papers.  I also created the number plate following Cassel’s tutorial and I have used it as the title.

This page is all about Queensland, my home state and a bit about Bundaberg, my home town.  Most of it is self explanatory and I will not bore you all with intricate details.  The koala, Cooktown orchid, anenome fish, brolga and sapphire are all Queensland emblems.  The state colour is maroon … a little of which can be seen in the coral tube.  Of course The Great Barrier Reef runs the full length of the Queensland coast.  The Rose Gum is our tallest rainforest tree and is invaluable to our rainforest ecosystem.  They grow in the far north and south east of our state.  The sapphires are mined in central Queensland and there are lots areas there for foraging.  The Parti sapphire (blue, green and yellow) are rare and much sort after.  The Padparadscha sapphire (a mix of pink and orange) are a lab grown crystal and hail mostly from Sri Lanka who have become experts in the technique required for such.  Bargara Beach is only one of our 7 beaches within a 20 minute drive.  Brisbane is our largest city and the capital of Queensland and Cooladdi is our smallest township … in  fact the smallest in Australia … with a population of 3, yep THREE!  The Queensland Nut (known to most of you as the macadamia nut) is indigenous to Australia and most Aussies along the central to south east coastal areas of Queensland had a Qld nut tree in their backyard … we had two!  The nut was first commercially produced on a wide scale in Hawaii where Australian seeds were introduced in the 1880s, and for some time they were the world’s largest producer.  South Africa has been the world’s largest producer of the macadamia since the 2010s.  The Australian continent seems determined to burn or drown ours out of existence.  Still … a burned Queensland nut is not half bad!  Oh … and I can’t forget to mention our Bundaberg Rum … oh yeah … and what a delightful little drop it is.  I like it over ice with a splash of soda water and a slice of lime with a mint leaf or two!  Okay, enough said, I’m off to the bottle-o now …  ;D ;D ;D 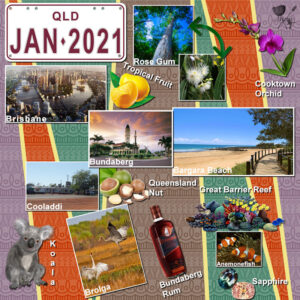