Christmas eve events were so unexpected.  The weather changed drastically shortly after dinner time and the winds were howling at 50 to 60 miles an hour. We heard a crash just before 10pm and John went to check it out. I got worried when he did not return and saw him trying to get in the house.

The Santa sleigh and all reindeer had been blown down and he went to fix then when he tripped over an electric cord in the dark and his face hit the curb and the street. He was bleeding so badly It scared me to death and I could not get his blood to stop. He put on his mask and drove himself to the hospital leaving me home  to worry because of the amount of blood and the pain he was experiencing.

He did not get back from the hospital until after 4am. He has a lot of stitches and pain in his hand arm back and chest. They did give him an Rx for the pain but we had to wait until this morning to get that filled as no drug stores are open on Christmas here.

I sure hope you all had a much better Christmas than we did this year. 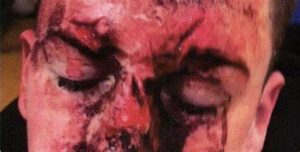