Lately, I haven’t been inspired to create scrapbook layouts, but I had lots of fun with the gnomes, trees, and garland from December Masterclass. It was a good distraction to everything that has been happening for the last months and all the concerns we all have.

So, here is my gnome. I decided to create him mostly using the pen tool, as I am still not too comfortable working with vectors. I was inspired by some illustrations I saw on the internet.

Sue McGuire said on the FB Group that she had created the nose with the cutout effect instead of bevel, so I decided to do it with this friend. 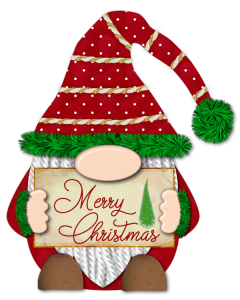