This is a picture of my Aunt Marge in front of the Police Memorial Wall in Washington D.C.  I’ve taken the picture of her at the wall and added a layer of her son, who was a policeman killed in the line of duty, and made his body almost translucent so that he appears to be a ghost.  The only picture of him in uniform was when he was younger and I wanted him to look about the same as when we last saw him so I cropped his head from another photo and layered it on top of his “ghost” and made that ghostly also.  I then created another raster layer in order to make his ghostly form have a translucent aura around him setting the color to white, the opacity to 20 and just painting in the area that I wished to have the aura.  After finishing this photo, I took it to Costco and had it put on a 20″ x 16″ canvas and it looks great.  I just hope she likes it for her Christmas gift and as a memorial to her fallen son. 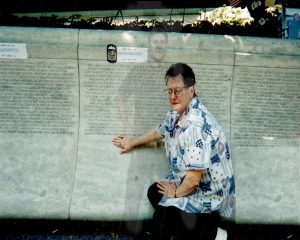