For Day 11, Project 5, I used a kit I made in December, 2015. When my daughter, Becky,  and I saw this tree on clearance at Bronner’s, in Frankenmuth, we really thought Sarah and Joel would think we had lost our minds. They wanted a new tree but could not get their heads together on just what. Joel wanted tinsel, for his retro mood, Sarah thought she wanted white, but if we saw a green one for their space, that was okay too. We found an ombre tree – tinsel, white . . . and, BLACK. Tongue-in-cheek we texted the photos – and they both fell in love with it – more so because it is actually, white, gray and black . . . the colors of their favorite basketball team – the San Antonio Spurs! Bronners shipped it out to them and when we got home two days later, it was already up and decorated. Five years later, it is still their favorite tree and really looks great!

Journal font is Mistral. I took the photo of my daughter, Becky, posing for her sister. 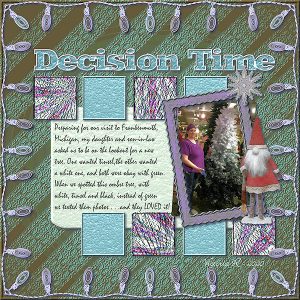