Day 6 was difficult for me. I didn’t want scary looking snakes on my page. Finally decided on rocks since we threw them at the snake.

My parents and I often went to “The Lake” to swim and fish. There was a public park which gave us access to the lake and picnic tables. One such day I was playing in the water and having a great time. My parents called me out of the water and I knew there was something different in their voices. Amazingly, I came out…I didn’t always without repeated requests.

They had seen a large water moccasin swimming toward the shore…right where we were. It came out of the water and my Dad began to throw rocks at it. I joined in because in my young mind, I could help. Each time a rock bounced by the moccasin struck at it multiple times. Dad and I continued to throw rocks at it until finally it was dead.

Shortly after that a family with small children came running from the parking lot to the water. They ran right over the spot where the snake would have been. All they were thinking was a great day for water fun. Thankfully, the snake was not able to spoil their fun.

I don’t like snakes. Never have. I am frightened of them but have learned to tolerate their presence at a distance. I do not want the venomous ones around but I can accept the non-venomous ones. They do their part for the balance of nature. 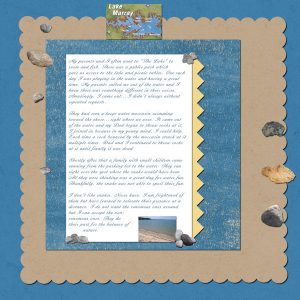