I know there are a couple of spelling errors, but I had so many issues with the text. First I was going to use the selection tool for my text, but each time if  I went to correct text the sentences would separate into sections with big gaps.

Also when I highlighted words for correction   the letter in question  would disappear so I would be inserting  a new letter,  losing a letter and I would end up having to keep replacing a letter that kept disappearing for  the entire sentence. Also a word would separate and I would end up with one letter on a line and the rest of the word on another line. Well this lasted about 4 hours from 4pm until 8 pm by the clock until I decided to change my plan and not use the selection tool for the text and this is how I have left it.

Sometimes one just wants to stop while the going is almost there, then it won’t get worse. I wonder if others have the same issues. or psp is just punishing me. 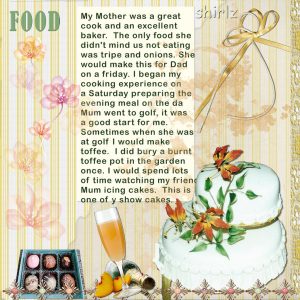