For whatever reason, I posted a response.  I edited it and resubmitted but it didn’t re-post.  So, I try again.

I’ve used PSP since Version 1.0 when it was basically a bitmap editor and owned by JASC.  I’m attending this boot camp to force some discipline to do a project rather than just working on some random images.

As for preferences I use the dark gray settings with medium gray background.  For palettes I tend to keep the ones I use most often open and docked.  For the image area I tend to tab the images as I ‘lose’ images behind each other.  (I find it tedious to get some to re-dock when I accidentally grab one and it ends up floating.  (I also, as workflow process, open an image and save it as a new project.  Maybe it’s old school thinking, but I have seen issues with JPEG artifacts with multiple saves of a file.

The image below is of a ship named the Balclutha, a steel-hulled sailing vessel.  It’s at the San Francisco National Maritime Park.  The image was taken during ‘Fleet Week’ in October 2014.  Other than cropping and reducing the image, no other effects, corrections or adjustments were used.  (Yes, it was that clear and bright an afternoon on the Bay Area.)

I look forward to following this thread and the projects that will be shared. 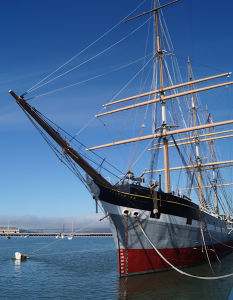