Awesome templates everyone.
Day 2
A few years ago I went on a 7 day holiday with my mother, daughter and her boyfriend. We went to a small island off the south coast of England not far from Portsmouth. We travelled from London to Portsmouth by train, then Ferry across the Solent to the Isle of Wight, then another train to the south of the island where were were staying on a camp site for the week. During that time we visited lots of places of interest around the island and the most memorable was a place that Queen Victoria and her family stayed and called home. We looked in and around her grand house, with so many rooms and bedrooms still furnished and decorated as she had left it. 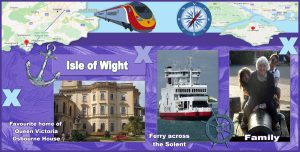