Cassel said, ” Kids will pretend to visit other galaxies in spaceships or rockets.”

I was one of those kids.

I fondly remember Buster Crabbe who almost got to be Tarzan, but instead became Flash Gordon and I was one of his Saturday Video Rangers.. which actually was a TV show right before Howdy Doodie Time.

It was because of Flash that I learned to like Ralston Purina cereal and got these wonderful space objects.  It was a long time before Capt Kirk arrived on the scene but I was already loving anything that involved space.  Here is a sorta representation of my bedroom back in the day as they say. 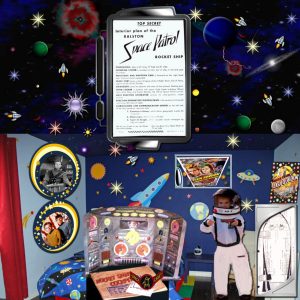