As a guy, glitter is not up my alley so in order to do the class I found some black and white glitter paper for free and downloaded. I can not remember from who so my apologies. I started my background with a transparent layer, added a gradient color, duplicated it and changed the layer to a blended mode of multiply. I then dropped my pictures, arranged them. Then like you did, I put in the glitter paper and duplicated it twice in order to have three of them. I then put one under each picture and adjusted accordingly. Typed Roads Well Travelled, rasterized it, then I added an effect called chiseled. I then went into the Tube and found some glitter which I sprayed around some areas. I really was not happy with so I did another duplicate of the original background and again changed the bending mode to multiply which darkened it more. Still not fully satisfied so I played around with distortion effects until I got the one I liked. Still did not look like a scrapbook and as such went into the Tube section, picked Travel and added a bunch of tubes in several spots on their own layers. Still not happy, I added another layer, poured white paint, did a selection just off the edge and cut out all from the middle to give it a white border. Thought the white was too strong and played with blendings till I got to Difference. Now I was happy….LMAO

P.S. I see with the white background you have the white part of the border does not come through as it blended in. Ohhhhh well….time to see my NASCAR racing…..have a good day! 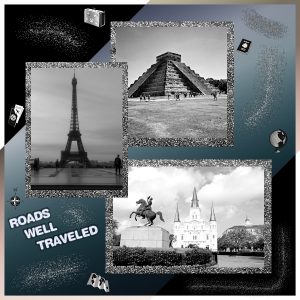