First, I want to ask for forgiveness after the fact, since I did more than requested in the lesson as when I completed it looked boring to me. So here is what I did …. I went to one of your links to get a free kit and did so of a company you gave a thumbs up. Second, I added another picture frame to add another picture from the kit, I erased behind the frame to add a picture there and then realized I did not have to but just left it alone. I changed the color of the kit by picking sepia. I added then the date. I added Paris which was part of the kit. Finally, the boredom hit and copied the pictures from the original file and used the plug in called Pic to Painting to convert to give it some pizzazz. Finally, I do not expect to win or be in the running. Just want to follow your camp to see if I learn additional items and not be cancelled out of class. I have so far so thank you for that. Will try to follow your request in the future. 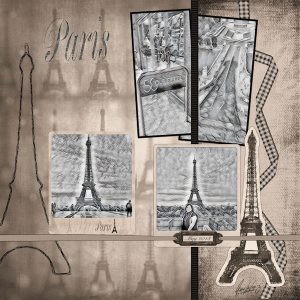