The 4th of May is our National Remembrance Day for all those killed in World War II and peacekeeping operations afterwards. At 8 pm there are 2 minutes of silence in the hole country and afterwards our King will lay the 1st wrath at the National Monument in Amsterdam. There are speeches and more wraths and flowers. The next day is Liberation Day.

My uncle, whom I never knew, was one of the victems. He was a printer by profession and took part in the resistence movement and owned a printing business. The group he was part of, was betrayed and he was taken prisonner. A few weeks later he was shot dead on the Waalsdorpervlakte, an area in the dunes near The Hague. He left a wife and 2 kids.

In his honnor we named our daughter after him!

To commemorate him I made this scrapbook- page to day. 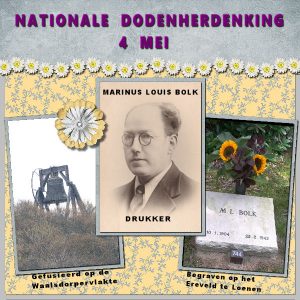