Day 7.  I used Cassel’s layout template and modified it just a little.  The papers are mine, the cluster is one I created a long time ago.  The font used for the title is Thickhead and I used the Colato font for the word stickers.  I wanted to add a text confetti but the script kept creating huge words that overlapped and some were also cut off so I had to put paid to that idea!  I created the stars instead from Cassel’s script.  Shabby chic is usually in pastels but the windows were shabby so I went with it cos it is my kinda shabby chic, lol!  The photo is from Unsplash and was taken by Matt Artz.  Thanks for takin a peek! 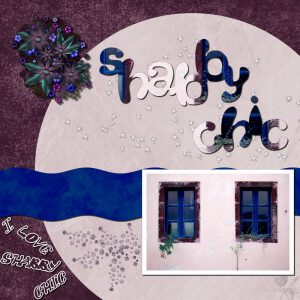