Next week marks another grim anniversary for my childhood home which was built in 1961. The pictures in the cyclone are memories of childhood. My mother, now 80, was in the house when it hit. She still gets anxious during stormy weather.

I think I may have overdone the shadows on the pictures in the tornado. I thought about folding or bending them but I would have to rewatch that tutorial. Maybe later.

The tornado graphic came from Freepik and the paper is from a mini-kit, April Showers, from FreeDigitalScrapbooking.com. 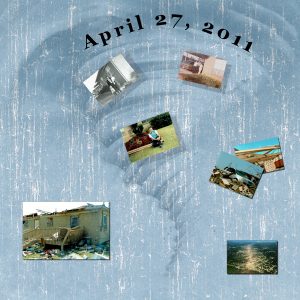