Thanks, Lynda. It’s just a Facebook simulation game called City Girl Life that was first sponsored by Disney and has changed hands several times. It’s similar to the Sims Social which shut down years ago. I actually started using PSP when I was asked to make some pictures for a Sims Social group. When that game closed, most of us moved over to City Girl Life. Long story short, I ended up as admin of a group of players. A feature of the game is the Daily Look contest, usually based on clothing collections they’re “selling.” They give us a theme and a background and we dress accordingly. Hence, the daily pics. We also have apartments that we can decorate. It gave me something to do when I was taking care of my mother. The reason I keep playing is because of the members of my group; they’re wonderful and I’ve known them for years now. (So much for making a long story short LOL.)

Here’s a screenshot of my current apartment and what I wore for the Live to Ride theme. 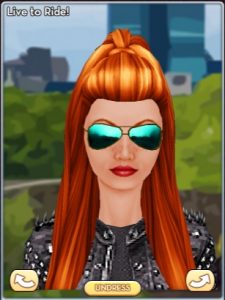 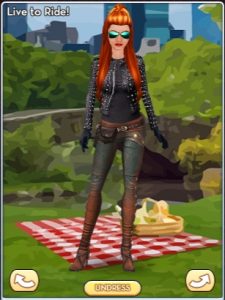