This is a very rough draft of an attempt at northern lights.

You can’t really see the starry sky with this thumbnail, but if you click on the pic, you can see it. I did the sky by adding noise to a black fill, then adjusting the levels (Adjust>Brightness/Contrast>Levels) to get more black & a random scattering of stars. Then for the northern lights, I used the Ionized brush in the Particle Shop plug-in (which came with my PSP2020). I then added a motion blur, but it didn’t do exactly what I wanted, so I added more blur by using gaussian blur.

(I don’t think I know how to use the motion blur correctly. What I was trying to do was blur the brush stroke in a vertical manner. It did it a little, but not enough, which is when I added the gaussian blur as well.)

Anyway, this is just from playing around & it’s not good enough to use a paper yet, but I wanted to post it here because I think the Ionized brush is really cool.

If anyone has better ideas on how to do northern lights, please let me know.  🙂

P.S. I watched a Photoshop tutorial on how to do the starry sky. Using PSP, I had to play around more with the levels, but the tutorial gave me the gist. If there is a tutorial here on how do a starry sky, let me know, because I would much prefer to follow Cassel’s PSP tutorials, not Photoshop. 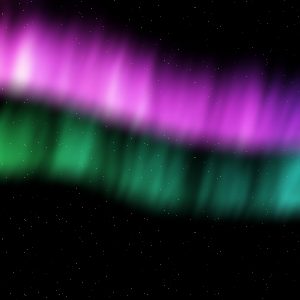