I have finally finished Basic Scrap Course 1, module 3.  As usual, I don’t seem to be able to follow the rules entirely but merge off into a different direction.  This time I used one of my favorite photos of my two eldest grandsons when they were small.  I was always so pleased and proud of how close they always were. I didn’t want to do the traditional layout because this image really wasn’t suited to it since the boys were sitting on the floor in front of a very floral sofa with a piece of extremely colorful wrapping paper on the floor in front of them with clashing colors and styles.  Jake, the younger boy had a favorite stuffed toy mouse that he took everywhere so since I love collecting psp tubes of mice myself, I decided to go in that direction.

First, I selected the wrapping paper on the floor and flood filled it with the mouse paper, then I separated Jake and Billy from the background and saved it as a tube, added the shadow and chose my background papers, placing a shadow on each layer.  I had this mouse maze that fit into the theme I had in mind, so used that as my second layer placing the boys and adding the shadow to that.  Then the pink to pick up the pink of the mice’s ears and a gray to pull it all together, each with their own shadows.   The three mice were separated from their background and each made into a tube with their own layers, off-set to make room for the text that I turned vertically because of its length instead of placing individual letters vertically ,that I did do at first but wasn’t happy with.  I didn’t use a shadow for the lettering because I thought it looked too fussy with this font.  I used the mice in place of the embellishment grouping because they are just so darn cute.  I did go through all the steps in the video though and I love learning all these new methods.

The boys, BTW, are now grown.  The younger is in training to become a fireman and the elder works in construction and is the same grandson that was in my earlier page taking his little step-daughter to her first Father-daughter dance.  I am very proud of them and Cassel, I hope you don’t mind my bending the rules, I’m still paying attention to everything you teach, you are the best.

Have a lovely evening and I WILL TRY to follow module 4 to the letter, I promise! 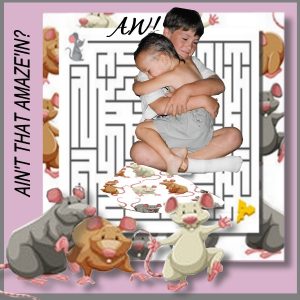