Let me introduce you to Tomi!  He’s still going strong.  I was given his mother just before she gave birth to  a litter. Tomi being one of the kittens.  She was jet black in colour, 4 of the kittens were  tabby, and then there was Tomi.  She became  pregnant again, so I gave her to a neighbour. I kept  Tomi and  one of his sisters, she went off and didn’t come back 4 yrs ago. Tomi is strictly an outdoor cat.  He behaves more like a dog, comes when he’s called, and constantly talks to me.   I used the kaleidoscope pattern in the frame .  I wasn’t quite happy with the colour of it, so used  the colourize tool.  The background paper  was created using an overlay. 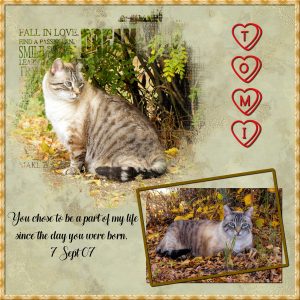