I found a photo … Yay!  This is a photo which I took of my Kia Soul in January 2010.  I had purchased the car brand new in September 2009 and took her for a road trip to Hughenden in 2010 … a distance of 1260 kilometers so it was a round trek of 2520 kilometers!  It was a trip down memory lane as I had lived there for a couple of years on a sheep station in the early eighties.  Hughenden is in outback Queensland and is just shy of being a desert.  Well … it was the monsoon season and Hughenden experienced a mini flood … unheard of!  Except, the same thing had happened when I lived there in 1981 … go figure, lol!  I used a scrap kit by Marisa Lerin titled “Discover”.  The sticker of the little blue car that is piled with luggage was created from a tube that I have had for an age.  Thanks for takin a peek! 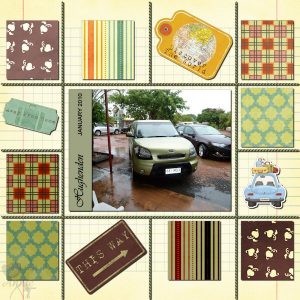