I was inspired by the Olympic Rings, as mentioned previously that was the theme for one of our annual birthday parties.   My sister hosted it and placed the Olympic Rings at the front of her driveway where we took pictures.   My brothers family represented the “Scotts”  I made the plaid pattern with Cass-plaid script, added a simple paper frame, found the crest on the internet. 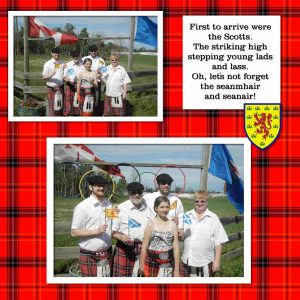