@Sue:  In my photography class, the first thing my teacher would ask as one of our pictures came up on the screen was, “What does this person want us to look at?”  So that’s my question to you:  what do you want me to look at, the herd or mother and calf?  If it’s the mother/calf, you’ve succeeded, because that’s what my eye is drawn toward immediately, both because of where it’s placed and because the colors are more saturated than anything else on the page.  According to my teacher, the right vertical line on  the rule of thirds grid is the strongest axis on which to place an object because people have a tendency to look, not at the center of a picture, but to the right of center–where the mother and calf are.

If you wanted me to look at the herd first, then maybe the page should be recomposed.  What if you lifted the herd up a bit so it lies in the middle of the top horizontal axis and then place mother/calf on the left vertical axis?  And, instead of cropping the mother/calf with the grass taking up so much of the lower portion of the picture, why not crop the image and bring mother/calf down a bit and then place the frame under the herd’s frame instead of over it?  I’m still going to look at them, but my eye will go to the herd first and then drop down.

Now, after all of that, I think it’s important for me to say that I believe what we create is uniquely our own and, if we’re at peace with what we’ve made, then it doesn’t matter what someone else thinks. 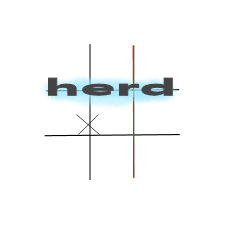