Our daughter moved into her home in 2011, I had not scrap booked this as I was unsure how to do it and the pictures are very low quality.  I used house template that Cassel gave us and the pictures worked well in the template.   I used Cass Clip To It to clip the pictures to the shapes in the house.  This script puts the picture and shape into a merged layer.   Once I am happy with the merged layers I then use Cass Merge Group Rename so I only end up with one layer.  Once I decided which scrap kit I was going to use I used Cass Open as A Layer, free script, this script brings in the elements/papers with the same name as in the scrap kit.   This way I always have the name of the file of each element/paper.     I used Cass Edge Magic script to darken the edge around the paper and the 2 tags at the top.   I used Cass emboss tape script, with free special elite font, for the dyno tape.   I applied drop shadows per Cassel’s guidelines.  However, I had a lot of elements so I used Cass Shadow Placer.  Cassel thanks for sharing the house template with us 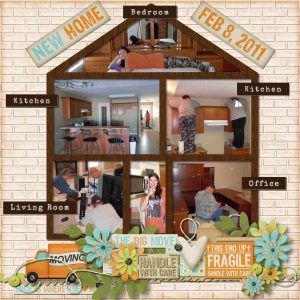