My husband is allergic to bees, so when we find a bees nest I have to knock it down.   There was one on a fence and I wanted to be protected so I drove the truck up to it and with a broom stick I knocked it down and quickly rolled up the window.  I searched on the internet and found the “aging” wonder woman.   I brought it into PSP and removed the background and made a PNG file.   I added arrows from preset shapes and added some texture.   I added the sticker effect from Cassel “How to create a sticker with PSP”.  I added a Queen bee, rather sexy one to offset the aging wonder woman!!!   I added a bee hive and placed it in the lasso, erased the back part of the lasso to make the effect the bee hive was inside.  I used a SF Slapstick Comic font.   Added a narrow frame with a small bevel to the pictures.  Added drop shadows per Cassel’s guidelines.  Used a purchased scrap kit for the paper and call out.  My inspiration was from Cassel’s Lab 6 Module 5.   The pictures were not that great, my husband was taking them from inside the house, but the story was funny and I wanted to remember it. 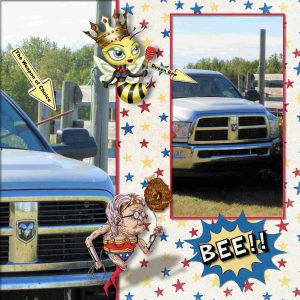