Now I know this is not “scrapbooky” at all, but it fit my gaming group’s theme today. I’m sharing it because I never would have been able to create it without the techniques I’ve learned here. I used one technique from Cassel’s Christmas 3 Tutorial to make triangular selections of equal size using different glitter patterns. I added an inner bevel on each triangle using opposing angles. Flood filled the transparent background with a metallic gold pattern and buttonized the pic. I used the glitter patterns to add borders around the pic of the woman and copied/pasted her on as a new layer. After adding a large black border I wrote the text with the Beauty Script font using the the same metallic gold pattern for my fill and applied an inner bevel to the text. Finally, on a new layer I used one of Cassel’s corner punches as a brush to create the corner flourish with a metallic silver pattern. Applied an inner bevel to that, then duplicated and mirrored it into each of the other corners. Then I ran out of time so I declared it finished. LOL 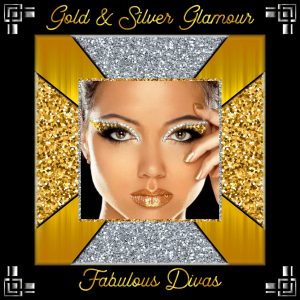