Cassel, you always make it look so easy.  Your color scheme is great!

Day 2, I did the map from Google.  I did as explained and zoomed in and took several snapshots and then aligned them and merged them.   The map still ended up small.   I added the map points, purchased from Scrap Girls Embellishment Templates Map Pointers, to the map.  Glad I had a chance to use them.  Then I added them below the map, larger with the city names on them.   I used cass-Airbrushed Paper for the paper, with 3 colors white and 2 shades of blue.   I used cass-Edge Magic on the map and pictures.  I put a large center drop shadow on all three.  I put snowflakes on the snow picture and suns on Dubai picture with an outer glow layer style. 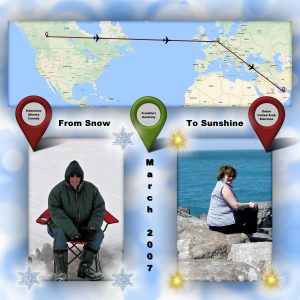