Eileen, great page.  Effective use of the flag colors and the drop shadow on the location.

We went to Dubai in 2007.  I did not know how I wanted to scrapbook it.  Now with the travel challenge I will be able to complete it.  I was there for meetings and we added another week for vacation.  My husband came too.   I did google and found the map of the United Arab Emirates and located Dubai with an X.  I added a bevel and with the paint brush I added blue to the water borders and brown to the edge of the border that has land.  The picture of the camels I took, I cut just a narrow strip of the picture.  Using sand texture from Scrap Book Campus I added a paper behind the camels and applied the sand texture.  Then I erased with low opacity the top of the camel picture so it would blend in.  I had purchased a flag template and copied, from google, the flag.  I tried to put a perspective shadow on the flag, I think it turned out OK.   I had a picture of the 7 star hotel and a picture out our hotel room.  I added a small border and applied a bevel.   I applied the sand texture to March 2007 with a darker brown.  For the border papers I used the colors from the flag and added a texture and drop shadow. 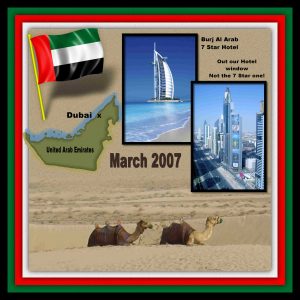