Three very nice but very different pages. Cristina I like the idea of using the letter C as the frame for the photos.

Here is my offering. The idea of using sequins as the elements made me think of some of the costumes from our 2007 school musical, Disco Inferno, so I found three photos of cast members backstage, used the logo background for the background page and a background from a set called On The Movies which I got from the Digital Scrapbooking place. I used the Albumin photo frame from PSP, the sequins were from a set called Remembering December from Club Digital, and the mirror ball I found on-line. It was a standing joke for many of our musicals that one scene always had to have the mirror ball in it (it belonged to one of the teachers) and this sometimes stretched our imaginations – on a couple of occasions the ball only made it’s appearance in the dress rehearsal as there was no really appropriate scene for it! The D could be Disco or Devil, depending on how you feel. 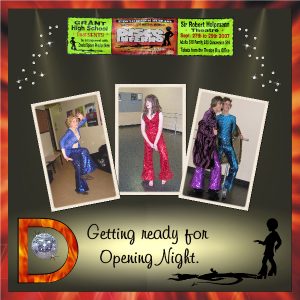