Home of the Scrapbook Campus › Forums › Lobby › Introduction › Here we are › Reply To: Here we are

Did you all know that Poser (the software) was originally invented to give artists a way to have models when live people weren’t available?  The first figure were like the smooth wooden ones you can still find in art stores.  The idea was that the figures could be posed individually or in combination, without or without props, with or without shadows, with various lighting effects to give a reference for drawings or painting.  The figures were in the same proportions as an ideal human figure…the exaggerated heads and bodies came in later when fantasy figures became popular and Poser/Daz came into their own as an outlet for creativity (including the ability to do animations within the software).  There are free models available on Renderosity and some other places…not quite as much available as there used to be but a way to start if you can’t afford to buy extras for Poser/Daz Studio.  I don’t use Poser anymore but it is a very interesting program, and has gotten much more realistic over time. 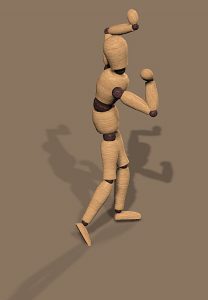