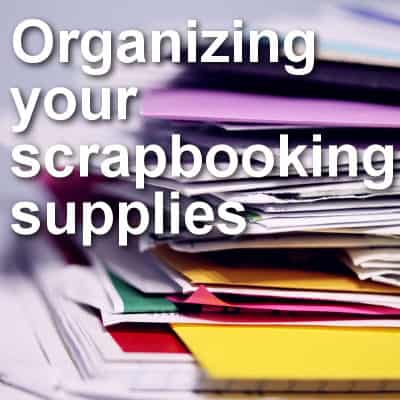 A large part of the projects in this Campus is about digital scrapbooking, and although you can learn how to create your own supplies, you might have already collected some, or might find great deals in ready-made papers, elements, templates, kits and such. You might not realize it, but those supplies you gather tend to add up very quickly, and if you don't have a reasonable organization, you will waste a lot of time looking for the perfect paper, ribbon, button, etc. So, let's make it simpler and faster for you.

It can be tempting to save all those zip files to be unzipped later, but you can forget to do so. This has several drawbacks:

So don't delay. You can do that within a few days, but don't wait months.

Some digital scrapbookers will sort their supplies by the store or the site they got them from. The main advantage for this type of sorting is if the site has some forum activities and one is required to use only supplies from the particular store. However, if that is not a need for you, keeping your files based on the store might be a little inconvenient as designers will often move from store to store, so either you will have kits from the same designer in two different store, or you will have to move the kits as the designers move (and sometimes they happen to sell in multiple stores simultaneously, so it adds to the confusion).

This might be the simplest method of organizing your kits. Everything being together, the colors and style would match, making it easier for you to find coordinating elements and papers. If a designer changes store, you won't have to move things around. You can create large folders with the designer's name or you can keep the zip file name as a category, since most of the time, the designer's name will be there for you to identify them. It will save you one click instead of making a single folder for the designer and then subfolders for the different kits. Your system could then look like this:

However, you might run into a little issue if you happen to get some of those collaboration kits, or blog train kits since there are usually multiple designers involved. Will you sort the individual parts inside each designer's folder, or will you create another folder for the store or the site where the collab or the blog train are from? Ideally, you would want to keep all those parts together as they should complement each other and would work well together.

Sorting by type of element

Some people might like to sort elements by categories. They will go through every kit they purchase and separate the buttons, the ribbons, the frames, the paper clips, the flowers, etc. to put them in their own sub-folders. This allows one to select one folder to search for buttons, or a different folder for ribbons, etc. This is great if you only need a handful of elements for your project, but if you end up needing an alpha for the title, 3 buttons, and 4 flowers for a cluster, a string, a ribbon, 2 frames, etc., then it can become tedious to find them all. Furthermore, you might end up with a large folder with 100 flowers and 80 buttons to go through. Another inconvenience of this method of sorting is if you need to credit the designer, or if you want to contact them for any reason; you might not know who it is, unless they have a memorable prefix on their files.

On the other hand, this sorting method can serve its purpose for you in many other situations. You might get some supplies that are not parts of kits. You can get a set of frames, or a series of buttons, or a whole pack of ribbons. In that case, it would make sense to start with large categories (like Fasteners, Plants, Ribbons) and then use sub-folders. So your system could look like this:

You can also add an "Other" inside those categories if needed (sometimes, some things just don't fit well anywhere else). You can also consider adding one sub-category of "Greyscale" as sometimes, you will have some of those elements that you will be able to colorize to suit your needs and you don't necessarily want to have them mixed inside the other sub-categories.

Although most designers will name their files in a logical and meaningful way, occasionally, you might find some files that simply state Button1.png or worse, Element01.png. if those files are parts of a kit, it might be ok if you use the content of the kit together, but if you can spare some time, it might be good if you were to add some meaningful information in the name, by adding the designer's prefix (or name) to the files, adding some descriptive for the elements (like maybe a color) or a definite name to replace a generic "element".

If you need to add a prefix to a lot of files, you can do that using the Batch Rename command in PaintShop Pro. If you need to change files individually to add a word or a descriptive for each element, you will have to do it manually. It can be tedious but worth it in the end.

Whether you already have a lot of supplies or you are just starting, it is time to get organized.

3 thoughts on “Organizing your scrapbooking supplies”