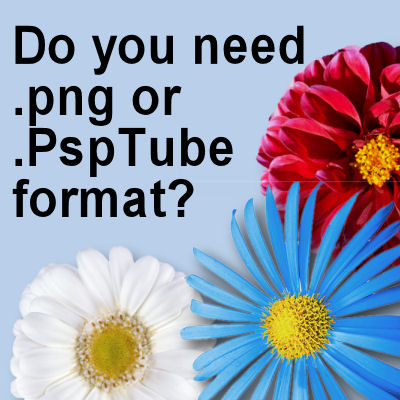 Do you need .png or .PspTube format?

The name "tube" has been used around for several years but has meant something different, in different contexts. PaintShop Pro has a feature called "Picture tubes", which are elements placed on a project with a click of the mouse. On the other hand, "tubes" have been seen as elements that have been extracted and have no more background, whether that was done in PaintShop Pro or any other graphics program. This has led to common confusion in the use of those elements and their format. Let's look into this more deeply.

As mentioned above, Picture Tubes are elements that can be applied using a click of the mouse after activating the Picture tube tool.

And once that tool is activated, you would get a list of various tubes available to you. 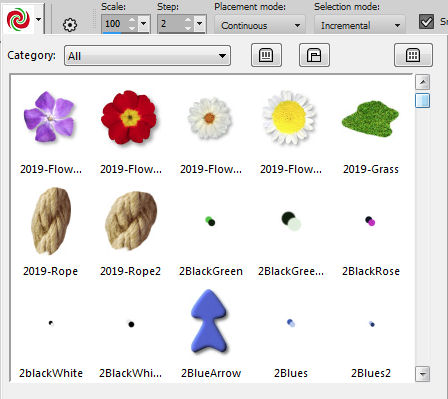 Whatever tubes you have available will depend on the PaintShop Pro version you have, the tubes you created yourself and those you purchased or downloaded. All those listed in that drop-down list are in .PspTube format and can only be used in PaintShop Pro.

On occasion, some PaintShop Pro users will share extracted images using a .PspImage format, since they are expecting the users to have PaintShop Pro. This also allows the creator to leave various layers with their name, or add a background for better visibility of the element, while those layers can just be removed when the element is to be used. And yes, they call those "tubes" too.

By common definition, those "tubes" are simply elements extracted from their background, and in order to save that transparency, the creators are saving them in .png format., therefore they can be used in most graphics programs and not exclusively for PaintShop Pro.

One common question is whether one should convert their .png images into .PspTube images. Any .png image can be exported as a Picture Tube, but do you really need to? The answer will depend on how you want to use the resulting "tube". Since the picture tube tool allows you to apply the image with one click, it might seem like a time-saver, but in reality, it would only be helpful if you are to use the same image multiple times, like if you have a snowflake image and you want to get 20 copies with 20 clicks. However, if you have the image of the Eiffel Tower in .png format, how many copies would you likely use? Would you want 20 copies on your project? If the answer is no, then, there is little need to convert it into a tube. You can just as well use the .png image, copy it and paste it onto your project and you are done.

When to convert .png image into .PspTube?

One situation where it would make a lot of sense to convert your .png image into a tube is if you have created a particular logo for your business or a watermark for your photos. Although you might use them only once at the time, you would likely use them over and over and over again. Furthermore, you could incorporate those logos or watermarks into a script or a batch process as the picture tube can be used in a recorded script.

On the other hand, if you have a ton of other "tubes", like flowers, animals, objects, people, it will be more efficient for you to simply keep them in .png format. If you want to save some clicks, get the free Open as a layer script, that you can bind to your toolbar. In one click (just like the Open command), you will select the image you want, and the script will copy and paste it onto your current project and will close the image for you.

All in all, if you have a collection of .png images that you are using as "tubes", save yourself some work and keep them in their current .png format. Picture tubes are not typically used for single images unless special uses. If you want to learn more about the power of Picture tubes, you can read this article. You will see that they are much more than "images without a background".

For more in-depth look of Picture tubes, you can purchase the classes Picture Tubes in PSP or Tubes with direction. Or join our DIAMOND membership to access those two classes and over a hundred more.

2 thoughts on “Do you need .png or .PspTube format?”