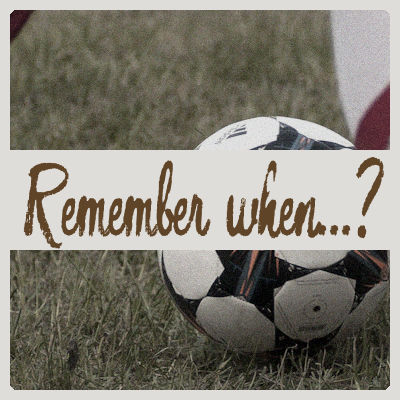 I have not been involved much into sports when I was a kid. Yes, I would play some sports at school, and for a while I was doing gymnastics but when I was 11, I had a coccyx accident which basically stopped me (I was not that good anyways). In school, one sport I remember playing was soccer, and that was probably just for phys ed class.

The memories are vague about playing soccer. We would practice in the gym only. We didn't have a soccer field at school back then. We learned the basics of the rules of the sport and that is all I remember of the class. This was in grade 6, before May since that is when I left that school due to a move. There was some kind of in-class tournament organized and I was designated as the team captain. I have no idea why, as I said, since I was not a star player at all.

Maybe I am not much of a team player in sports, so I was quite  happy to be a goalie. I was on my own and that suited me just fine. There is really only ONE game that I remember, and it was the last game. The final probably. And at the end of the game, the score was 0-0.

I am sure that this has nothing to do with the actual rule, but the teacher wanted a winning team within a short time period, so he decided to take out BOTH goalies (that was me) and place the goalies in the center. Quite a change of role, don't you think?

In the goal, again

The game didn't last very long at all. Imagine playing soccer in a gym (not a big field to run across) and no goalies in either net! Well, I took a shot at the opponent's goal and the ball just happened to go through everyone's legs and it scored. Interesting feeling to be the goalie AND score the winning goal, don't you think?

Even though this was never a "real" tournament, or a "real" game played by the rules, our team was still ranked first for that "tournament" and I got my very first red ribbon for a first place. I still have that ribbon, somewhere.

Since I was not much into sports, this was my first, and ONLY first place finish in any sport. It still makes me smile to think about it!

How about you? Were you good in sports when you were young? What sporting event do you remember? Did you ever win something? Share the story below so it can trigger more stories for everyone.